This preliminary clinical and radiographic study examined the survival, the marginal bone loss (MBL), and the influence of prosthetic abutment height (AH) on MBL, around hybrid implants placed in two groups of partially edentulous patients: healthy (HP) and periodontally compromised (PCP) patients. Ninety-three patients requiring single or multiple unit implant-restoration, either in mandible or maxilla, were treated while undergoing cement-retained prosthetic restoration. A total of 54 implants was placed in 45 HP and 56 implants in 48 PCP (maxilla: 35, mandible: 19 in HP; maxilla: 31, mandible: 25 in PCP). All 110 hybrid implants positioned in pristine bone provided a 100% success rate in both HP and PCP. No statistical differences were recorded comparing the MBL values of maxilla with those of mandible. In HP and PCP, a similar and limited amount of MBL was recorded, and, additionally, the higher the AH, the lesser the MBL. In conclusion, results indicate that these new hybrid implants examined could reduce the risk of peri-implantitis due to their coronal-machined surfaces and improve osseointegration due to their apical-rough surfaces.

Within the limits of this study, the following conclusions can be drawn: 1) hybrid implants in both periodontally compromised and healthy patients provided a 100% success rate in pristine bone; 2) the recorded amount of MBL was very contained and, surprisingly, similar in both periodontally compromised and healthy patients; 3) the higher the prosthetic abutment height, the lesser the MBL around implants with cement-retained prostheses. Nevertheless, long-term studies on hybrid implants are required in order to confirm or refute these findings. 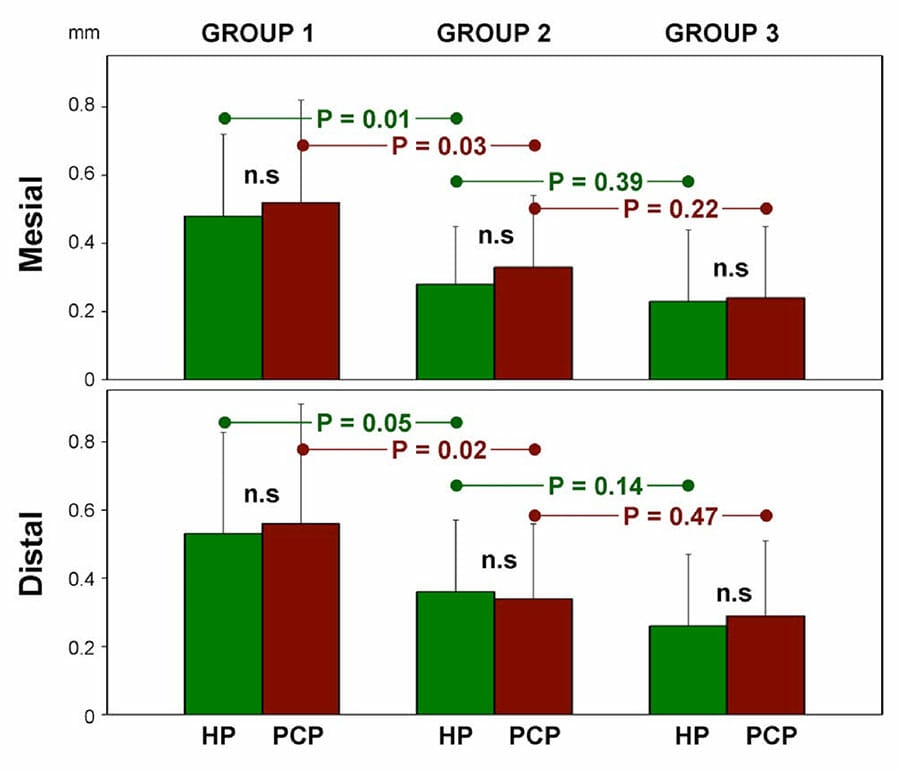 In particular, many systematic reviews and clinical trials suggested that implant failure and associated marginal bone loss is greater in patients with a history of periodontitis. Although the precise nature of the relationship between periodontal and peri-implant infections has still not been completely clarified, microbiota-environmental factors have been identified in both situations. Recent analyses have demonstrated no significant differences between bacterial genera on implants and teeth in supra- and sub-gingival biofilms. Specifically, diseased peri-implant and periodontal tissues shared similar microbiota. In fact, in periodontal disease-affected patients, it has been demonstrated that periodontal pathogens can be transmitted from periodontal pocket to peri-implant sulcus. For a coronal rough surface implant, a biofilm of bacteria forms in and around the implant upon exposure to the oral environment. Due to the fact that these microbiota may persist and proliferate on the implant surface, they can lead to peri-implantitis with consequent peri-implant bone loss.

Rough implant surfaces provided better clinical and histological performances as demonstrated in human histological and histomorphometrical studies in which a significantly greater bone-implant contact with rough surfaces was found in both pristine and grafted bone when compared to a machined surface. In fact modification of machined-surfaces via sandblasted and acid etched treatment have been developed in order to create micro-topography to improve titanium implant healing in bone by means of a higher rate and greater extent of adherent bone formation. Based upon this premise, hybrid implants should include the advantages of machined surfaces in the coronal region, reducing the risk of peri-implantitis and the biological advantages of rough surfaces in the apical region improving osseointegration. However, only few short- and medium-term clinical evaluations have been carried out on these implants.

Marginal Bone Loss (MBL) around implant necks has been utilized for many years as the principal criterion for evaluating long-term implant success. Recently, it was demonstrated that prosthetic abutment height, calculated as the distance from implant platform to the apical edge of the crown, can significantly affect peri-implant bone stability. These authors reported less MBL around implants with longer than with shorter prosthetic abutments.

The aim of this preliminary prospective study was to analyze the survival and marginal bone changes around new generation hybrid implants placed in two groups of partially edentulous patients: healthy (HP) and periodontally compromised (PCP) patients.