The objectives of this study are to evaluate long‐term wettability of novel surface‐ engineered, clinically available dental implants, featuring a surface nanolayer of cova- lently linked hyaluronan, and to confirm the relationships between wetting properties and surface nanostructure and microstructure. Wettability measurements were per- formed on clinically available hyaluronan‐coated Grade 4 titanium implants, packaged and sterile, that is, in the “on the shelf” condition, after 1 year from production. Wet- ting properties were measured by the Wilhelmy plate method. Analysis of the surface structure and chemistry was perfomed by X‐ray photoelectron spectroscopy (XPS), scanning electron microscopy (SEM) and energy‐dispersive X‐ray (EDX) analysis, atomic force microscopy (AFM), and ζ‐potential measurement, either on implants or disks or plates subjected to the same surface‐engineering process. Results show that hydrophilicity and ensuing capillary rise of the hyaluronan‐coated implant surface is unaffected by aging and dry storage. Chemical analysis of the implant surface by XPS and evaluation of the ζ potential indicate that hyaluronan chemistry and not that of titanium dictates interfacial properties. Comparison between XPS versus EDX and SEM versus AFM data confirm that the thickness of the hyaluronan surface layer is within the nanometer range. Data show that nanoengineering of the implant surface by linking of the hydrophilic hyaluronan molecule endows tested titanium implants by permanent wettability, without need of wet storage as presently performed to keep long‐term hydrophilic implant surfaces. From an analytical point of view, the introduc- tion in routine clinical practice of nanoengineered implant surfaces requires upgrading of analytical methods to the nanoscale. 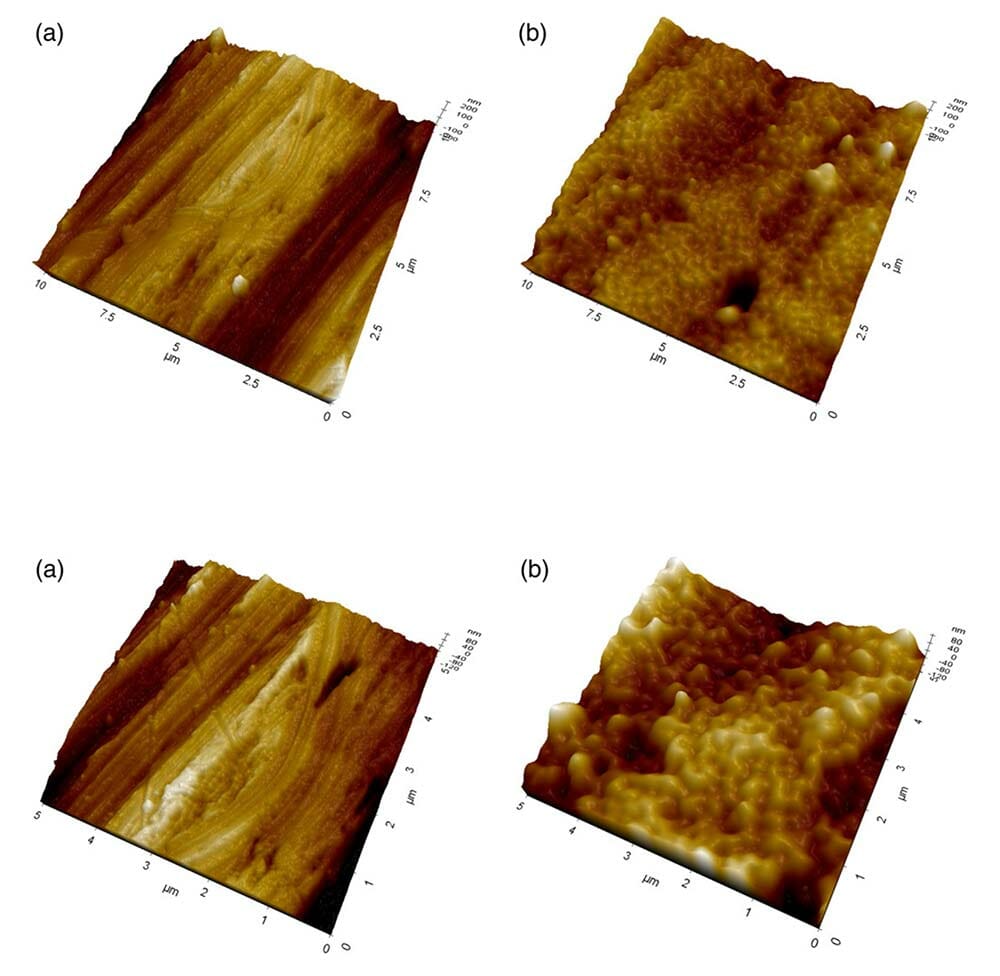 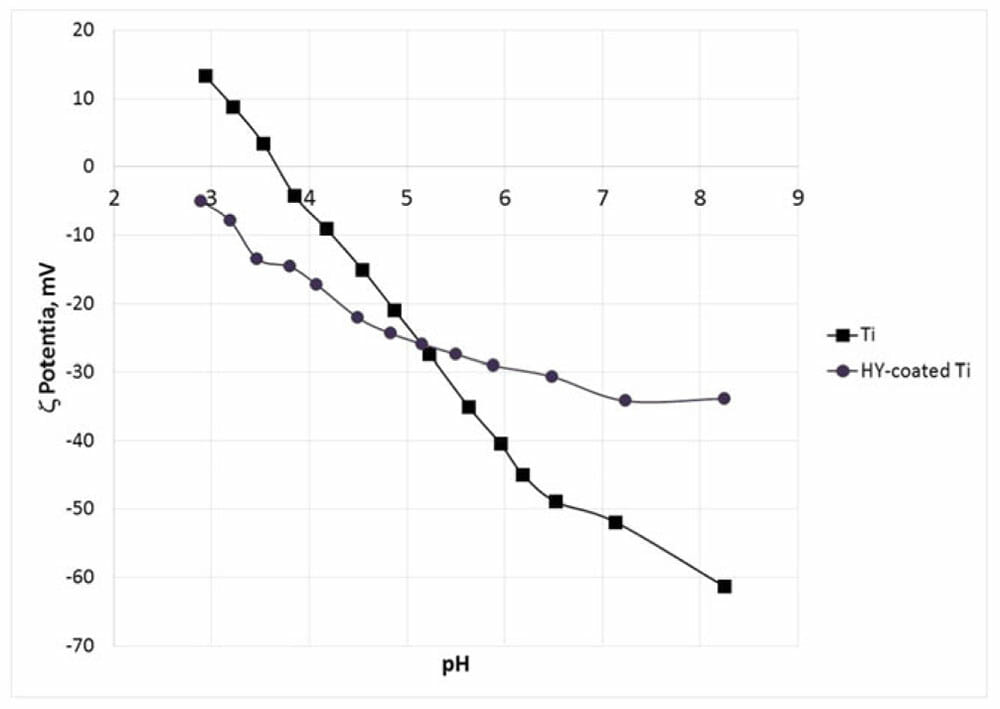 Ever since the expression of the Lampert rule for blood coagulation (Neubauer & Lampert, 1930), significant research effort has been devoted to the investigation of putative relationships between the

deceivingly simple materials surface property called “wettability” and cell/tissue biological response (see Vogler, 2001, for a highly recommended review on the water wetting terminology and its usage in biomaterials science, and Rupp et al., 2014, for specific discussion on wettability of dental implant surfaces). Oral implantology did not escape this trend. Based on in vitro and in vivo evidences of better periimplant bone regeneration on high energy, or hydrophilic, titanium surfaces (Buser et al., 2004; Gittens et al., 2013; Park et al., 2012; Schwarz et al., 2007; Wennerberg et al., 2014), the SLActive concept was introduced in clinical practice (Chambrone, Shibli, Mercúrio, Cardoso, & Preshaw, 2015). The SLActive approach involves packaging of dental implants in saline solution, to preserve the freshly prepared microrough surface from contact with the atmosphere. It is based on knowledge developed by a prominent founding father of biomaterials surface science, Bob Baier, who discussed the concept of storage in water to preserve high‐energy surfaces of titanium dental implants in the 1980s and early 1990s (Baier & Meyer, 1988).

From a surface chemico‐physical point of view, wettability of tita- nium surfaces is pretty well understood. Titanium, or the titanium oxide surface layer produced on contact with atmospheric oxygen, belongs, as almost every metal or ceramic materials, to the domain of “high‐energy surfaces” (Zisman, 1964). In practice, their internal cohesive energy leads to an excess specific surface free energy some order of magnitude higher as compared to that of water. As a conse- quence, every pristine metal or ceramic surface, titanium and titanium oxide included, is fully wettable by water, or hydrophilic. The very same high surface energy, however, promotes adsorption of low‐ energy ubiquitous hydrocarbons from the atmosphere. In practice, every metal or ceramic surface exposed to the atmosphere becomes hydrocarbon rich, in a time‐dependent way, turning from a high‐ energy to a low‐energy surface, whose specific surface free energy is of the same order of magnitude, and in general lower, as compared with that of water. Hence, the finite water contact angles, or hydro- phobicity, detected on real‐world titanium surfaces. In the case of tita- nium dental implants, the basic determinant of excess specific surface free energy, that is, the surface chemical composition, combines with the other properties that affect macroscopic wetting behavior and capillary rise, that is surface microtopography and thread size and shape (Rupp, Scheideler, Rehbein, Axmann, & Gels‐Gerstorfer, 2004), yielding increasingly hydrophobic surfaces as time from production goes bay. This behavior has been defined “biological aging” (Att et al., 2009; Choi et al., 2017a, 2017b), with a view to its biolog- ical effects. Its cause, however, is plainly chemical–physical, as just discussed. The hitherto most investigated chemical–physical approaches to exploit biological responses driven by hydrophilic implant surfaces involve preventing hydrocarbon adsorption by pack- aging in water (i.e., the already quoted SLActive approach) or getting rid of adsorbed hydrocarbons by UV light or glow discharge cleaning just before usage by side‐chair devices (Canullo et al., 2016; Choi et al., 2017a, 2017b).

Advances in nanotechnology and surface engineering offer fur- ther keys to hydrophilic implant surfaces: Wetting phenomena are exquisitely surface sensitive, that is, they are driven by the chemistry of the outermost atomic or molecular layer (Adamson & Gast, 1997). Thus, an intrinsically hydrophilic, adsorption‐resistant, nanometer‐thin, chemically linked surface layer, provided of course it does not adversely affect osteointegration, can impart permanent wettability to titanium implant surfaces, with no need of wet‐storage or hydro- carbon removal to restore hydrophilicity. Moreover, due to its nanosize, it does not affect implant surface microtopography and it

is not subjected to massive delamination, as reported in the days of micrometer‐thick hydroxylapatite coatings.

Biomolecular nanoengineering of implant surfaces recently entered clinical practice, through novel dental implants featuring a sur- face nanolayer of permanently linked hyaluronan, or hyaluronic acid (HY; Morra et al., 2018). The relevance of HY molecular interactions and signaling properties for tissue regeneration and osteointegration, as well as references to relevant in vitro and in vivo works, can be found in the quoted paper. Besides, HY is also a paradigmatic hydro- philic biomolecule, and many of its current applications in medicine are based on its hydration properties (Knopf‐Marques et al., 2016; Morra, 2005; Sudha & Rose, 2014). On the light of claimed role of sur- face hydrophilicity on periimplant tissue response, it is of interest to investigate the effect of the surface‐linked hydrophilic HY nanolayer on implant wetting properties.

The scopes of the present work are the following: to evaluate long‐term wettability (>1 year on the shelf after production) of a novel surface‐engineered, clinically available dental implant, featuring a sur- face nanolayer of permanently linked HY; to confirm the relationships between wetting properties and surface nanostructure and micro- structure; and to highlight the increasing role of finely tuned surface‐ sensitive analytical techniques and relevant chemical–physical back- ground in the understanding of implant clinical response, on the light of quick advancements of dental implants surface technology towards nanoengineering.